I’m still alive. In case you were wondering. I don’t know what’s been wrong with me recently. Or for a longer while now. Let’s call it the late winter blues. Or something. But… spring seems to be just around the corner and hopefully will be here to stay soon. I’ll keep my fingers crossed that my mood might improve with more sun, less rain, more daylight!

I’ve been insanely busy with my grad school assignment all February and was sort of knocked out by a persistent cold directly after that. I guess the adrenaline from the assignment stress kept the cold at bay until the day I handed in the paper. My throat still feels not quite all right, but at least there is no more snot. It was the 2nd cold within just a couple of weeks and I really don’t need anymore of that, please.

I started writing this post a few days ago, when I had thought that I’d have a few less stressful weeks ahead of me and start doing more fun stuff and just be more relaxed about life. And then our state’s parliament screwed these plans up for me as we’ll have unexpected  elections mid-May. Which means hell of a lot of work for a lot of people. Including me *sighs*

And over the last few weeks or even months I was already stressed out by my work situation to begin with. I usually don’t write much about it on here and I won’t do that in this post. I’m just frustrated a lot, because it’s not the job I was trained to do and it’s not a job I really want to keep doing for the rest of my life. I’m overqualified (if that even is the right term in English) and thus sometimes am expected to take on assignments which usually wouldn’t be part of my job description, but actually lay in my coworker’s responsibility. I don’t mind doing this work per se, it’s just frustrating to see that I’m not adequately paid for doing it. I know in times like these I should be grateful to have a job at all and I am. I just sometimes – and recently more often that not – think I could do better somewhere else. Although that’s also not quite true. The scared and insecure little girl inside of me is convinced that she can not do better anywhere else and thus the woman, that I am, is still stuck with this job and getting more frustrated and unhappy with it week after week.

It’s so easy to say: “Well, just do something about it. Change something in your life” but it’s so incredibly hard to really actually do that. For me anyway with my selfdoubt and insecurities and tendency to dwell on the past or or imagine my future (in both good and bad ways). I know I have to start being more present and mindful and aware of the moment and to change my attitude towards a lot of things. It’s just easier said than done. I’ve picked up reading ‘The Power of Now’ and there is so much stuff in that book which really hits home. Scary in a way, but also uplifting. Because it describes the weird uneasiness in perfect words and makes me realize that a) I’m not alone in this and b) there is a way out of it. I just have to take the steps. One by one…

When I started this post a few days ago I had planned to write about other stuff that was stressing me out, but by now that feeling has passed and I don’t want to spend time re-visting it. I’m glad I’m over it and was able to let it go. I know it will roar it’s ugly head sooner or later anyway.

There also were a few more topics I had actually planned to comment upon, but I’ll keep those for another post (hopefully). What else am I doing at the moment? I’m busy catching up with “Switched at Birth” and after that I really should get to watching the last 15 or so episodes of “The Big Bang Theory” which I have missed this season. I still have to check out “Awake”. I very much enjoy “The Good Wife” this year and am so glad I started watching this show to begin with. “Grey’s Anatomy” had such a nice first half of the season in the fall, but the second half can’t keep up with it. By now I’m keeping my fingers crossed that Paddy and Ellen will leave the show after this season, because I’m so tired of the rest of the show, but don’t have enough willpower to just stop watching it.

Talking about Paddy: As a “fan-girl” I’m so incredibly happy that he has joined Twitter, because his tweets are definitely fun to read. A few days ago his wife Jillian joined Twitter as well and with only a few tweets she proved that the Dempseys really are the most adorable couple and family. This tweet? Too cute for words! 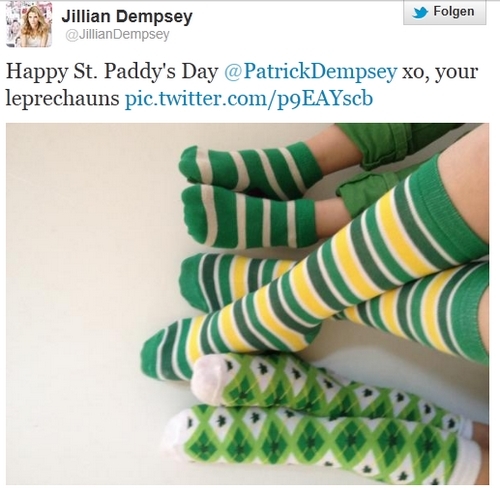 1 Response to Jumble of Thoughts #004