Two posts in a row, wow. I blame the rainy/snow weather that kept me inside most of the weekend :-)

The way from Perth to Inverness is pretty straightforward, just follow the A9 up north, but we took a few tiny detours. The first one was to Loch Tummel and the Queen’s View and just a few miles further there is the Pass of Killiecrankie, which is famous for the successful Battle of Killiecrankie in 1689 in which the Scot beat the English. Not that that victory helped them in the long run, but they sure like to remember it :-) We walked down the steps to the gorge to see the Soldier’s Leap, where one English soldier is said to have escaped the Scots by jumping 5,5m / 18.5 feet over the river.

The next stop was Blair Castle, another large aristocratic home, but it’s not lived in any more. It’s open for the public as museum and as a restaurant and it can also rented for events, weddings and such. There are huge grounds which can be explored and we took a stroll there as well. And there – not on the castle grounds but outside – we saw our first Highland Cow :-)

Just another few miles down the road was the House of Bruar, which is neither Castle or aristocratic home, but “the home of country clothing” (and country living) and we had actually planned to just go for a walk in the woods nearby, but then it started raining and we decided to check out the food court and the stores first. And of course we bought stuff as well, it was impossible not to… 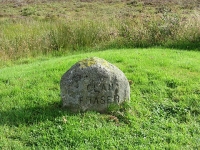 It didn’t stop raining so we continued our trip through the rain towards Culloden. Luckily it was the only time it really rained like that in our two weeks in Scotland and I was so grateful that it had stopped by the time we reached Culloden and I saw – among other things – the clan stone for clan Fraser and could finally check that off my bucket list :-)

Inverness was our home for the next two nights, as we had planned to explore the northern Highlands from there. Judging from the photos it’s hard to believe that it was heavily raining just a few hours before, isn’t it?

Claire is more and more torn between her feelings for Jamie and the feelings for the husband she has left in the 20th century.

Claire and Jamie continue to have lots of sex. Hot and rough and gentle… and still… everywhere. All the time. :-)

Jamie can’t avoid a “men talk” with his 8 year old cousin Hamish and it’s hilarious. Just like all the other talks with nephews, sons and grandsons which will happen years later. Davina Porter is doing a great job with young Hamish’s voice.

Jamie had once played shinty in Leoch’s rose garden, when he was 16. That’s a fact I hadn’t noticed the first time I read the book. Shinty is such a typical Highland activity.

I still haven’t quite figured out a few things about Jamie’s past. He left Leoch when he was 16. Did he go back to Lallybroch? Or somewhere else? He was taken from there when he was 19, but what happened in the three years between? I guess it will be mentioned within the story and I just don’t remember it, but it’s still bothering me, that there are things about Jamie I don’t know (or remember) :-). I guess I have to check other Outlander resources to find the answer to this question right away.

“Now, then. What does ‘fucking’ mean?”
My surprise must have shown plainly, for he said irritably, “If ye must call me names, that’s one thing. But I dinna care to be called things I can’t answer. I know it’s a damn filthy word, from the way ye said it, but what does it mean?”
[….]
“Aye, well,” he said in broad Scots, “if ye bad wi’ a vixen, ye must expect to get bit.”