My Thoughts on the Grey’s Season 9 Finale

I gave up writing Grey’s Anatomy reviews here over two years ago, because even though I couldn’t give up on the show, I wasn’t interested in spending a lot of time dissecting an episode and what parts I enjoyed and which I didn’t and why and all.
For some reason I felt compelled to gather my thoughts on the season 9 finale, even though I thought most of the events and storylines were bordering from mediocre to ludicrous as most of Grey’s has become in the last few years. But there were some monumental moments for a MerDer shipper as well, which warrents a review. I think :-)

Main Storyline: The Storm
I really don’t know what to think of that. When I watched it at first, I was almost screaming at my TV for the ludicrous storyline and of all the things that went wrong and how the hospital wasn’t prepared for any of it, or so it seems. It all seemed so far fetched and unrealistic, but I don’t work in an hospital and I never had to live through anything like a tornado, huge storm, blizzard, flooding and the destruction of all kinds of infrastructure (power outage etc.) that come with it. So maybe my view of the whole event is skewed, because I’ve never been through something like this.
But last year I had the chance to get a tour of the internal power supply of a large hospital (it was work related and it’s long story), and I remember the various backup scenarios and mechanisms which are set up to prevent things like they happened at  GSMH last night.
Why wasn’t there more technical staff around than just that one old janitor? Where were electrical engineers or whoever is in charge of the power supply on a daily basis? And especially in a situation which needs all hands on board? Why weren’t there enough spare batteries? Whoever is managing the hospital is doing a crappy job at it. Oh wait, our guys themselves are managing the hospital …
And then in the end the one brilliant janitor guy fixed it all by himself and just the one switch had to be switched on again? And where were the precautionary measures against the flood in the basement? This is the power supply system and there is a storm coming, so: electricity + water … and no one cares? Yeah right.

The bus crash was too much as well, but I admit that it added to the whole “who’s going to die” suspense and thus it made it kind of ok. What I’m trying to say is that even though the source for the whole drama and suspense was far fetched. for me it kind of worked to keep me excited for the fate of some of the doctors, which I guess, was kind of the point of it all.

About the characters
A few thoughts about everyone, in some kind of ascending order starting from the ones I don’t like or just don’t care about…

Stephanie and the intern with the last name Murphy:
What exactly is the purpose of these characters to be there? Why should I care about either of them?

Jo:
Another one of these stupid interns. I actually liked her a tiny bin at the start, but her whole backstory felt so contrived. Just not my cup of tea, I guess.

April:
Ugh! Die, April, Die! Seriously, if anyone should have been electrocuted or killed in a exploding bus it should have been her. She is sooo annoying and the whole April/Jackson/paramedic triangle is so boring and predictable and … does anyone actually care about April’s love life? Or about April at all?

Jackson:
Apart from his inevitable entanglement with April, I actually like him and I would have been bummed had he been the one who was killed by the storm. I admit for a moment I was scared about that.

Webber:
I didn’t see that coming in the beginning but once Jackson and the paramedic didn’t die, it was sort of obvious that he would be the one, who’s life would be hanging on a thread (that was what the spoiler said, I think). Not sure if he really is dead, but I honestly don’t care either way. I don’t quite recall when I lost all sympathies for this man, but it happened, so whatever happens to him is fine by me.

Miranda Bailey:
I’m still mourning the original Nazi Bailey and am still pissed about the character assassination which happened to her, starting with the flirty Bailey a few seasons ago, when she was hooking up with the male nurse. Her part of the plane crash storyline didn’t bother me as much as it did a lot of other fans, but the way she dealt with the staph infection, was obnoxious and the way the flipped out to the medicine cabinet was painfully embarrassing IMHO. At least she finally snapped out of it, when it came to one of her “babies”, i.e. Meredith needing her help in the OR.
Can anyone explain to me why she looked so sober and started crying after she had saved Mere’s life? Well, for the sake of drama and suspense, I guess, but her reaction didn’t really make any sense to me.

Callie:
I’ve never been a huge fan of her, but she grew on me, especially in this last season, when she stepped up to be there for her wife. And therefore she she really didn’t deserve this and I felt so sorry for her.

Arizona:
I had actually liked her quite well until this season and I had sympathy and understanding for her after the plane crash, even though she took her wallowing and depression too far IMHO. But this act of adultery and her blaming Callie for the amputation came out of the blue to me and to me that usually a sign of bad writing, at least in regards to Grey’s.
Either way, I don’t really care much about what happens to them, as I didn’t ship them, but at the moment I’m definitely advising Callie to get away from Arizona.

Owen:
I stopped caring about Owen ever since he accused Cristina of killing their baby with the abortion. Jerk! I was so bored by the whole kid Ethan / adoption etc. storyline and I get that it was needed to get to this break up, but still…. boring.
The breakup was still a sad scene, because it’s just sad, when two people who obviously love each other, can’t make it work despite their true feelings. And it’s not anyone’s fault, just, you know…  sad.

Shane and Heather:
Those two are my favourite among the new interns, the other three could transfer to anywhere for all I care. Shane and Heather are both equally dorky characters, but very loveable in their own way. I love the competition between them and Shane’s determination to stitch Meredith up was hilarious.

Alex:
I really, really wish the writers would find him a nice, normal girl for a change. But I want him to be happy and if he thinks that Jo will make him happy, then I guess I will have to learn to live with that. Until he makes her crazy or gives her cancer *g*

Cristina:
It’s not just Meredith and Derek who have come a long way, but Cristina as their friend as well. Minus the calling Meredith their “person” stuff, I enjoyed seeing her as a wonderful friend to both of them. She was supportive, but without being overbearing and she knew when to give the Shepherds their privacy. I’m totally ok with her being that kind of “person” to Meredith (and Derek).
I’m also very, very glad that she didn’t change her mind about being a parent or of doing anything against her nature to make the relationship with Owen work. As sad as it is for both of them, Cristina is a surgeon, first and foremost, that’s the core of her being and I liked that she was allowed to admit to that. Not every woman is cut out to be a mom, not every woman wants to be a mom, and I’m happy to see these woman featured on TV as well. And she had some great lines, as usual. “A moron could do a c-section. No offense.”

Meredith and Derek:
My favourite couple on TV had a baby! A healthy and cute little baby boy. Yay! I never thought I’d live to see the day. And it’s so nice for a change to not have to worry about either of them or their kids (yes, plural, kids!!) over the summer.
Meredith was… well, she was Meredith: dark & twisty and scared and worried but also hardcore when it was important. How she gave Shane instructions how to proceed with the surgery was very cool. I didn’t like the DNR talk, but as I was confident that Shonda wouldn’t be that cruel, it didn’t bother me too much.
Derek holding his baby boy in his arms was soooooo cute. Adorable in the “make my heart explode and my ovaries hurt” kind of way *g*. And all of them together in the end… *deep sigh*
And then there is Baby Boy Shepherd’s name: Bailey. I really like the idea behind it, I honestly do, but I’m not sure if I’ll ever get used to there being two Baileys on the show in the fall. Because Miranda Bailey as coined that name as her name, 90% of the times when she is addressed or talked about people don’t say, “Miranda” or “Dr. Bailey”, they just say “Bailey”. And it’s going to be confusing to have a cute little boy being called that as well. So I hope his parents will come up with a equally nice nickname for this little guy. 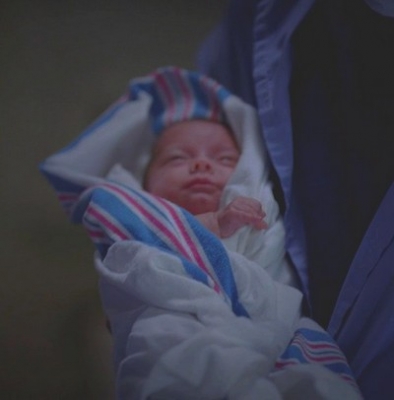