Yesterday I quite by accident stumbled on a nice German blog and found another person who obviously is collecting (coffee) mugs. Yay! I’m not alone with this quirk :-). I don’t even know when I started it as I don’t purposfully collect them. I just happen to like so many mugs I see, especially when I’m on vacation and the mug will serve as a nice reminder of that vacation. So yes, I do own a lot of mugs. In fact I had to put a few of them in a box in my basement a few weeks ago, because I didn’t have enough space left in my cupboard. Which reminds me that I do need to buy some more shelfs or cupboards for my kitchen this year.

Anyway, I thought it might be a nice idea to tell the stories of some of the items in my mug collection. (I was tempted to use the title “Mug Shots” for this category, but I think after a while that joke might not be funny any more *g*) These photos will be rather randomly, just in the order that I will use the mugs and remember to snap a photo. Starting with these two, which I used yesterday and today at breakfast. 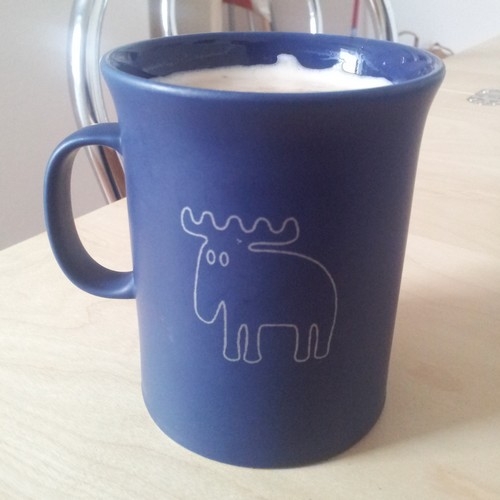 When I remember it correctly I bought this one at a christmas market a few years ago. It’s blue (my favourite colour), it has a moose on it (my favourite animal) or more importantly two moose, one on the right front and one on the “back”, which is the front for any leftie. Like me! Stuff “normal” *g* people probably never spend any thought on, but it can be frustrating to always just see the blank back of a nice coffee mug, just because you automatically keep the handle on the “wrong” side. So, every nice and ambidextrous coffee mug get extra points from me ;-) 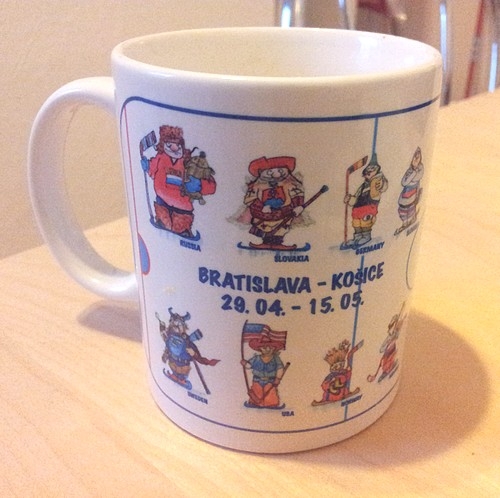 This one is one of my latest acquistions, I bought in Bratislava, Slovakia during the Hockey World Championship. We had such a great time there. And I still love the cartoon characters of each participating nation. Also: Gold star for the decoration being all around :-).
This entry was posted in Mug Shots and tagged Blog, Coffee, Mugs. Bookmark the permalink.