I’m a regular costumer at Starbucks, but I haven’t bought one of the regular “city mugs” so far. Maybe because I don’t have a special connection to any of the cities of which special Starbucks mugs are available. Or maybe because I think the whole idea is a bit too … I don’t know…. generic, maybe? I understand that the mugs all have a similar design to make them instantly recognizable as one of the Starbucks city mugs edition, but to me that also makes them not unique enough to buy one.
But every once in a while Starbucks manufactures special editions of their city mugs or at least I think they must do that in other cities and not just in the one I work in. Because I bought a very special mug there in 2010 and I’m still glad that they sold this mug for the very special occasion of “RUHR 2010 – European Capital of Culture”. 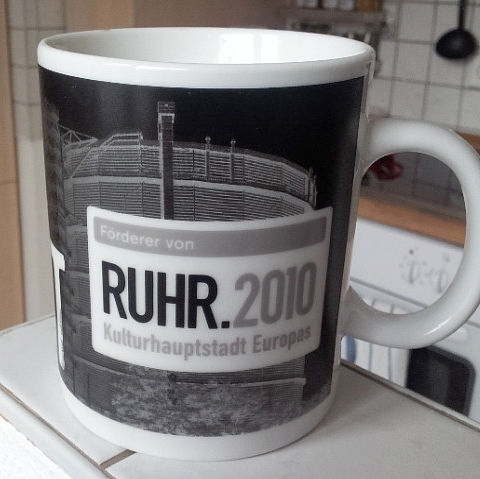 Officially the city of Essen was chosen to be the “capital of culture” because regions or metropolitan areas can’t apply for this event. But in our case it was clear from the start that the complete metropolitan agglomeration which in a lot of ways feels like ONE city anyway, was the Capital of Culture in 2010. Why “Ruhr”? Because for the last 150 years, this area has been called “Ruhr (Metropolitan) Area” (Ruhrgebiet in German) after the river Ruhr which runs through it. For almost as long it has been the coal mining / steel manufacturing / industrial “capital” of Germany. A lof of the old and now derelict industrial infrastructure is still around and has been turned into Industrial Heritage sites, and those sites are one of the reasons which makes our region so special. Visible behind the RUHR2010 logo the Gasometer Oberhausen which has been (and still is, I think) the largest gas-holder in Europe. Today it serves as exhibition hall.

On the other (left, so… yay!) side of the mug, there is Zeche Zollverein, a former coal mine industrial complex, which is a UNESCO World Heritage Site because it has been considered a architectual and technical masterpiece. It now hosts various museums, exhibitions halls, stages for art and cultural events and then there is the whole areal which nature has reconquered. Zollverein is the first location I take friends and family when they come visiting for the first time :-) 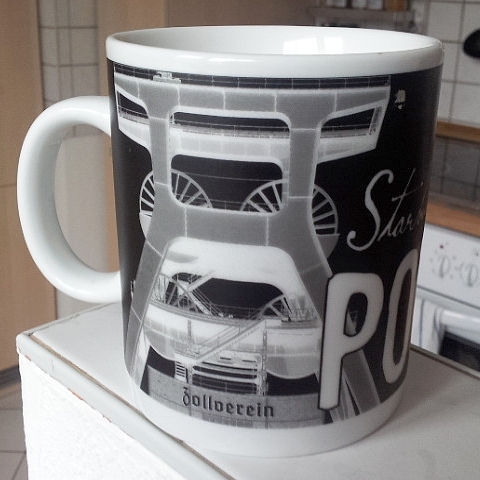 Wondering why the mug is designed is black and white instead of the usual Starbucks city mugs colors? Well, it’s just a nice remeniscensce of the “black gold”, which was and probably forever will be what the Ruhr area is known for, even though there are just very few coal mines still in operation. In colloquial terms the Ruhr area always also has been called Ruhrpott or Kohlenpott (Kohle = coal) or just Pott. Pott derives from the term “pütt” which is a german term for pit. But Pott also is a colloquial term for “Topf” which is the german translation for pot. And a Starbucks mug is a large drinking vessel, which with a bit of imagination can be considered a small pot(t). So… voila: