The week in Stockholm passed much too quickly. Seriously, why does time fly when you’re having a great time but seems to only move at snail pace when you’re bored or miserable? There’s a nice Einstein quote for that problem by the way, “explaining” relativity, I just saw it in Swedih in a museum’s store again.
Anyway, we had a great time, the weather was perfect, around 13-15 °C, sunny with a blue sky for most of the days. The one day it rained in the afternoon we were back at our hotel room to rest, so it didn’t really matter ;-)

I didn’t take all that many photos, because I did that on my trip to Stockholm in 2010 and I didn’t need yet another batch of sightseeing pictures of the same sights ;-) I’ll probably post some of those I took though in a few days, once I’ve sorted them.

Hockey-wise it was rather disappointing, because Team Germany didn’t play as good as they did last year or even in the games before the tournament. They can do better and we had and still have no idea why they don’t play like that in the important games. Like right now! I’m watching the game against Norway while I’m typing this and after six minutes Germany already was 0:3 behind. Holy crap!

As much as I enjoyed this past week and even though I left in quite a good and relaxed mood, but in the past few days I noticed that I have been overly sensitive. It’s hard to explain, I guess I felt misunderstood or wrongly criticized a few times and overanalyzed tiny details or comments and it all made me feel so bad about myself. I know I shouldn’t feel bad about myself and I know that my self-perception is screwed up and that it all shouldn’t mean anything. I just haven’t felt like that in a long time and it scared and still scares me a little. No idea how to snap out of that yet…

But enough of that darker stuff. There is also stuff on the bright side of my life. “Bright” might be the wrong term for the amazing, captivating novel I read over the last 2 days, but the fact that there was a book that captured my attention so rapidly can be considered bright at least. I’m talking about ‘Room’ by Emma Donoghue. The reviews mentioned that it’s almost impossible to put down and it was. I started reading it on the flight back home on Thursday and after getting home, unpacking and such I spent the rest of the evening and night (up until 3 AM) reading and I continued the next day until I had finished the novel. I love when a story can suck me in like this. And my mind still returned to the story over the past few days, because it’s been so heartbreaking in a way and uplifting in another. If you’ve got one or two days off sometime you should really check it out. But be warned it’s a story about being kidnapped and held captive for years, so there is some dark stuff of course, but it’s writting in such an incredible and brilliant way, that it’s just stunning. It was to me at least.

More bright stuff. I very much enjoyed this week’s Grey’s Anatomy and even though I didn’t want to get sucked into the whole “OMG what’s going to happen?” speculation drama, I couldn’t help it: the end of the episode, the promos for the season finale and of course all the talk from Shonda a few weeks/days ago has my fan-mind reeling  in overdrive. There is so much potential for great storylines for Derek and Meredith in season 9. So I should start praying that Shonda doesn’t screw this up yet again like she did with not adequatly dealing with the aftermath of the shooting in season 7.

We elected our state parliament (and thus government) today and at least there my favourite coalition of social democrats and my Greens were able to score ;-) They’ve manage to get a solid majority and I’m really happy about that.

Something else really cheered me up at the end of this week as well. Diana Gabaldon – author of my favourite novel series (Outlander) – replied to one of my tweets. To two actually, so I guess I can say, I was talking to Diana. Wow! Here is proof ;-) 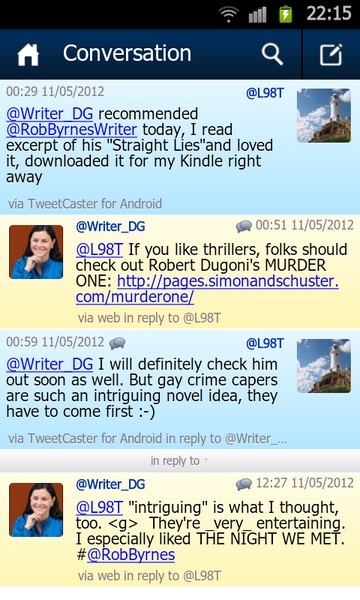