Memories Of My Trip To Scotland (Part 1)

When I saw my friend posting her fifth post with photos from our Scotland vacation on her livejournal I feel so guilty for not sharing some of my photos here too. It’s been over 2 months and there haven’t been more photos than those which showed up in the instagram feed on the right side while I was in Scotland. Shame on me.

I’ve decided against sharing the photos in a chronological order, but will try to do a more theme-oriented selection. That way I might be able to avoid sharing similar pictures from various parts of Scotland over and over again. Maybe…
Just for your information and in case you might want to get an idea of where we went in these two week in mid-August. We took the ferry to Newcastle (England) and drove up to Scotland from there. We spent the first night in a small town on the Firth of Forth (east of Edinburgh). From there we drove north, spent a night in Perth, drove further north, spent three nights in Inverness and toured the Highlands from there. After that we headed south-west to the Isle of Skye, where we spent two nights, followed by two nights in Fort William, two nights in Callander (on the edge of the Trossachs) and our last night was in Galashiels, in the border region. From there we headed back to the ferry-terminal in Newcastle.

But like I said, I won’t follow this route with my blog posts now. This first post will mostly contain photos from Culloden, where in 1746 the last pitched battle was fought on British soil and where the English troops crushed the Scottish rebellion of 1745.
During my first trip to Scotland in 2009 I started reading and loving the Outlander series (and have blogged about it a few times). The first two novels take place during this time 1743-1746. It’s a must-see for every Outlander fan and thus was on my “bucket-list” for this trip. I might have nagged my friends a bit much with my “need” to definitely see it and have enough time to spend there ;-) On our way up to Culloden we had a few hours of heavy rain and I was afraid that would ruined the visit to the moors, but by the time we’ve reached Culloden it had cleared up and turned into a very nice afternoon. That change of weather was typical for most of our trip, and probably is just typical for Scotland.

But before I start with the actual photos from Culloden, here are a few photos from the Scottish border.

Which is not a real border, because Scotland is a part of the United Kingdom since 1707. That was one of the reasons the Highlanders rebelled in 1745 after all ;-) Since the late 20th century Scotland has been granted the power to self-govern most issues (education, health etc) and in 2014 there will be a referendum about extending these powers or to even get full independence. It’s a complicated issue, but a very interesting one, if you’re interested in politics. Which I am, so during this vacation I bought a Scottish newspaper almost every dan and almost every day there was some article about this. I will definitely keep an eye on this issue from over here as well.

All over Scotland there can be found places that have some connection of “the ’45” (rebellion in 1745) and in that way of course also to the Outlander Saga. We saw the huge monument in Glenfinnan, which was errected in 1815 to remember the place where in August of 1745 Charles Stuart (the Bonnie Prince Charlie) had raised his royal standard to claim the Scottish (and English) throne. And with which he had started the rebellion which had ended so tragically on Culloden moor only eight months later.
On the Isle of Skye we saw the grave of Flora MacDonald, the brave young woman who had helped Charles Stuart to escape the English troops after Culloden. She still is and probably forever will be considered a Scottish heroine. 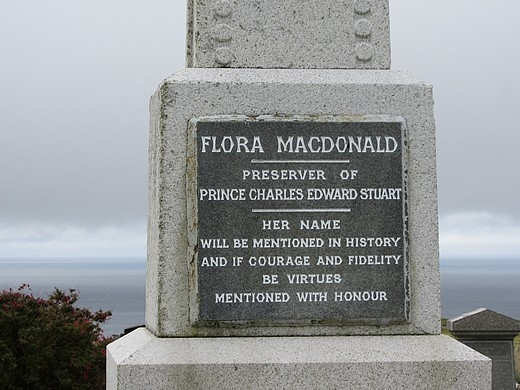 I should use this moment to admit that this little guy is named ‘Charlie’  because of this story. My friend had bought the exact

same sheep a few days before I did and after some consideration we decided to name her “Flora” after Flora MacDonald. I think my friend might have bought the sheep on Skye. When I decided to buy one later as well, we knew my sheep needed a name and that those two sheeps should have some kind of relation. So it had to be “Charlie’ of course ;-)

But back to to Culloden. There is a very new, modern visitor centre with a great exhibition about the the rebellion and the battle itself and basically about everything related. Heaven for an Outlander fan who also always has been interested in historical stuff, i.e. for someone like me.

The exhibition itself is a state-of-the-art historical museum exhibition, if you know what I mean. It was very informative, educational and interactive and it’s all been presented extremly well. The exhibition displays both sides (the English Government and the Scottish Jacobite) on opposite sides of the rooms, all very easily to distinguish because of the two different colours, red for the english, blue for the Jacobites. 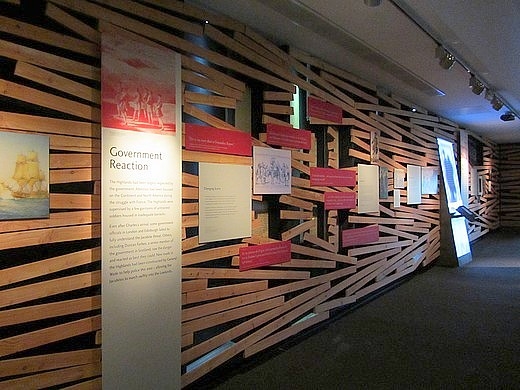 There also was a 360° “cinema” which showed a short movie about the battle itself, with both troops on opposite sides marching and shooting towards each other. There were screens on each of the four walls and the visitors were thus right in the middle of it and no matter to which side you looked at the end of the battle there was no escape. It was all obviously re-enacted and there was less visible violence or death than in any ordinary action movie, but it still left me a bit unsettled, because we were standin right in the middle of it all. Great idea to make the horror of the battle more real for the visitors.

Right outside the museum there is a cottage on the moor, but probably not the one Jamie found refugee in after the battle :-) And then there is the moor, where the battle took place and where 1500 – 2000 Jacobite rebels died within less than an hour. Red and blue flags mark the lines of the battle and at every corner the audio guide (with GPS, neat idea) could tell you more about the specifics. The sun made it all look so peaceful, but knowing what I know from the Outlander books and from I had just seen inside the museum, I had an idea of the horrors that had happened there. 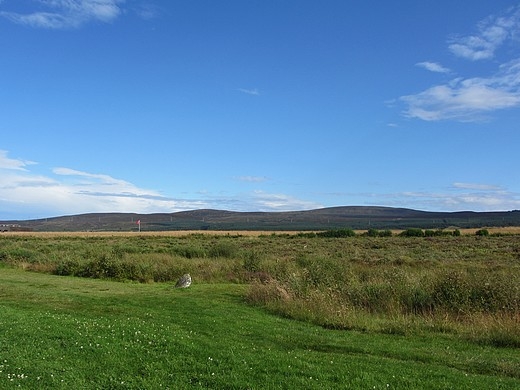 There also is the memorial Cairn and the graves of the clans, where the fallen soldiers of each clan are buried. 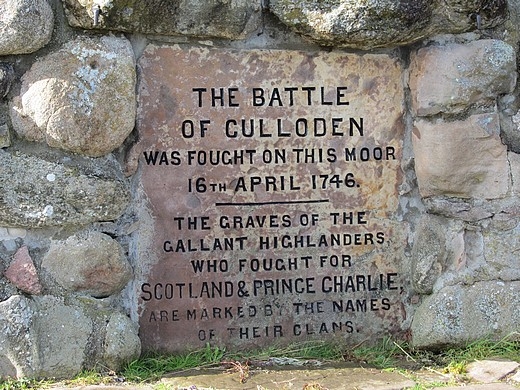 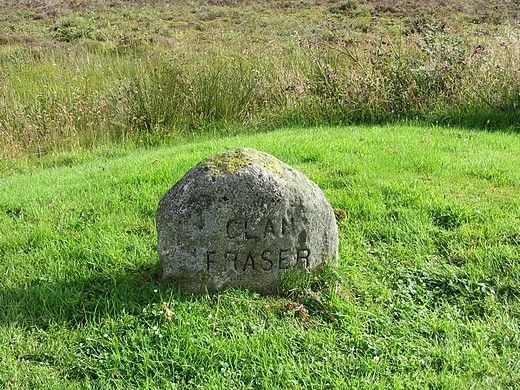 I was really glad that I had a chance to visit Culloden this time and to just be a part of it. Isn’t it weird how the love for a purely fictional character can make you care so much :-) ?

On a lighter note: Outside the visitor centre there is the Culloden Walk, which is made of 1200 individually engraved stones. The stones were sold as part of the fundraising and I neither knew about that before nor did I know that Diana Gabaldon had her own personal stone there as well. I definitely would have tried to find that one. But by chance I came across another one, which I did love to see there as well… 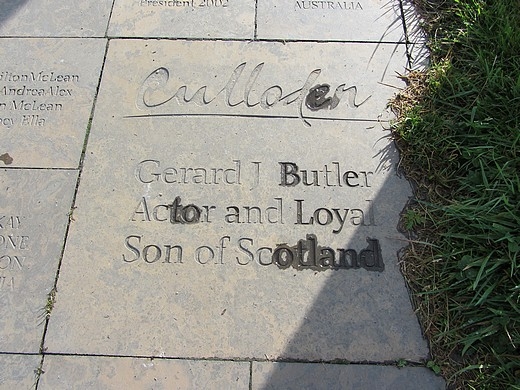 2 Responses to Memories Of My Trip To Scotland (Part 1)