My Day at Hogwarts…

I’ve been back from London for exactly a month now and still haven’t shared my photos from the Harry Potter studio tour. Or wrote a bit about it. Shame on me. I’m not sure how long this post will actually be when I’ll post it, but at least there’s a gallery of photos at the end. [I finally found a gallery plugin that mostly works the way I want it to. No idea how I will get the URL out of the caption and see the image title instead].

I’m not a diehard Harry Potter fan, but I loved the books and enjoyed the movies and basically think that the whole Harry Potter world is a marvelous creation by the brilliant, creative mind of Joanne K. Rowling. I also always love to get a look behind the scenes of TV or movie productions, because it is a fascinating world.
So my expecations of the Harry Potter studio tour weren’t low, but luckily those expectations were not just met but easily surpassed. It was such an amazing experience with so many interesting things to see or read or hear about.

The queue in front of the entrance wasn’t too long and as I arrived later than I had scheduled and too late for my assigned entrance time slot (due to some train delay), I was very happy about that. It was not problem to get in, even after my designated time. Phew. The Harry Potter tour could begin and it did with a nice photo op right next to the queue. 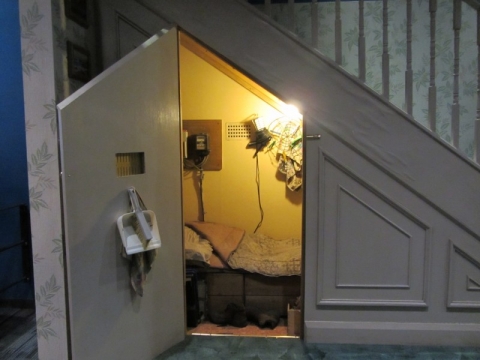 Every few minutes a group of about 30 people (I’m sooo bad with estimating and it’s been 4 weeks!) are allowed to enter and then the tour starts with two different introductions about the studios, the movies, the tour and all that stuff. Nice to get into the right mood and probably necessary to explain a few things about the studio tour.
There even was another short introduction by a guide in the Great Hall and I was starting to worry that the whole group would be ushered through the whole experience as a group, but that ended after the Great Hall and everyone was free to move along as slowly or quickly as they desired. Including a lunch break at the outdoor lot I spent more than 4 hours at the studios and I could have spent even more time, had my brain not stopped taking in information at some point :-)

I think the gallery will bascially speak for itself and give an idea of how many different things there are to see and explore. And it’s all presented in such a professional way with the right amount of information right at each exhibit, but also a really great multimedia guide. There is an audioguide, narrated by Tom Felton (Draco Malfoy) who is doing a splendid job with it. But the guide also includes video clips with interviews and behind the scenes footage and more photos and things to read up on. Absolutely well done.

My favourite part of the exhibtion might have been the “animal actor” exhibit, which surprised me a bit, because I’m neither a big cat or dog person. I like them all right, but I never had a pet of my own. 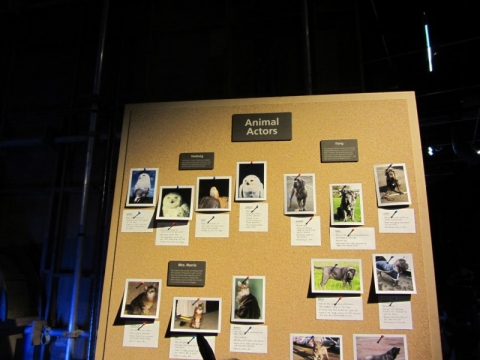 Anyway, I just loved the way they gave a great peek behind the scenes in an interview clip, but the exhibit featured every single animal which was use to portray the main animal characters: Hedwig, Mrs. Norris, Fang and Crookshanks. Even Scabbers was mentioned of course. I never really thought about the roles of the animals in the movies and how special they needed to be trained. There were four Hedwig owls, for instance, each with a unique talent. One for sitting still on Harry’s arm, one for sitting still in a cage (I think), one for delivering letters etc. Quite fascinating, isn’t it?

And there were so many more interesting tidbits of information. Heaven for every fan of the movies/books and even for those like me who might be most interested in the process of making these movies. And I admit it was fun to see some of the stuff close up and to stand there in the Great Hall or to walk around the huge scale Hogwarts model. The trip is worth every pound and every minute. Seriously, if you ever have the chance, go and check it out…

This entry was posted in Life and tagged Books, Harry Potter, Movies, Travel. Bookmark the permalink.