My Year With Frank Turner…

Exactly one year (52 weeks) ago, on Sunday, 23 June 2013 I was channel surfing and for reasons unknow (karma, maybe *g*) I caught the Southside Festival on TV. I don’t know if it was live footage or recorded from earlier that day or the weekend.

There was this guy with a guitar singing

I caught myself “grooving” along with the beat and decided to watch this performance and see which direction the song would take.

Now who’d have thought that after all,
Something as simple as rock ‘n’ roll would save us all.

Another 10 seconds later the beat sped up, the singer was sort of jumping/dancing across the stage in a stunningly energetic and crazy-in-a-totally-good kind of way and when he returned to the microphone to start another “Hear ye” line, I knew I was in for something good!

I watched and listened in awe and after the singalong at the end I knew I was in love :-) With this song. With this band, whoever it was. The song was “I Still Believe” and the band were, of course, Frank Turner & The Sleeping Souls.

In these last 52 weeks I

Listed in bullet points like this it sounds  totally crazy, but I don’t care, because I had such a great time doing all these things. I’m kind of itching to buy a ticket for a festival at the end of July after all, even though I was determined not to. But after the amazing show in Luxembourg last weekend I’m still hesitating, because I doubt it will be as cool as Dudelange. Front row and all!

I’ve been fans of singers/bands before and I still am, but yet I don’t recall anyone ever having kept my attention and affection as long and as deep as Frank Turner has. I thought I had outgrown this stage of “fangirling” in my late teens/early twenties. So it’s a tiny bit disconcerting to be honest :-).

I don’t really want to overanalyse it and I wrote enough posts about him already. Let’s just say that one year later I’m still in complete awe of his songwriting. So many songs make me want to move my feet and so many of his lyrics strike a chord deep within me. Whether it’s something I can relate to from my own personal experience or just the way he writes of his own emotions which make me just feel all these emotions with him. His shows are the most fun ever, because these guys on stage have so much energy and so much fun themselves and it’s easily transferred from the stage into the crowd.

But to be honest, I think, a huge deal of my ongoing (totally platonic) infatuation with Frank is, that he is one of the nicest guys I’ve ever encountered in the whole wide world of “showbiz”. And I’ve met a few. Not hundreds, but still enough to have a solid frame of reference, I think.
I might disagree with him on some political issues and we definitely disagree on religion, but I just love, love, love his attitude towards so many other things. I love that he cares about issues and that he gets involved. I love that he considers himself not just a musician/songwriter but an “entertainer” and that he tries to make each show as memorable as possible. I love that he tries to be as accessible as possible to everyone who likes his music and I don’t only mean the fair ticket prices, but also his interaction with fans on- and offline (after the shows etc.).

From everything I’ve so far read or seen on DVDs or on Youtube and from everything I’ve experienced first-hand myself, I can say that Frank Turner is just an incredibly kind and considerate and downright lovely guy. And he loves dogs! To the extent that he asks the staff at the venues to bring their dogs along in the afternoon, so that he can have some play and cuddle time with them before the show. Seriously, what’s not to love?

So… Cheers, Frank and Thanks for a pretty cool first year. Here’s to more to come… 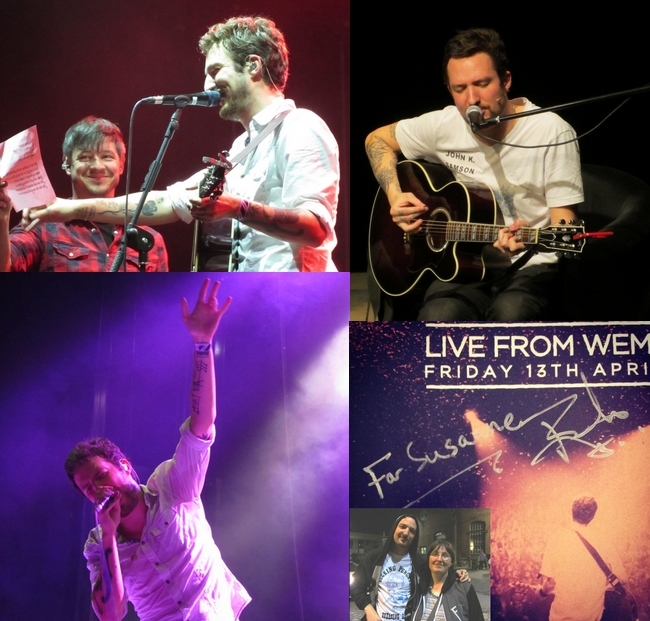 This entry was posted in Life, Music and tagged Frank Turner, Life, Music. Bookmark the permalink.