How I once tried to compile the ‘perfect’ Frank Turner setlist…. (Part 1)

“Perfect” in this context of course means including the songs I personally would love to hear and to loose a few of the songs I’m not too hung up on to make space for more of my favourite ones. So 100% biased and only from my point of view, of course.

Because, let’s face it, Frank Turner himself does an incredibly awesome job of putting together his own setlist. I’ve mentioned before: one of the many things that make his gigs so much fun and make me come back for more and more and more, is that he changes his set from gig to gig. Not revamps it completely during one leg of a tour, but usually he changes about four or more songs from night to night. During the acoustic set, during the encores and somewhere in between as well.

At some point over the Christmas holidays I started thinking about what my perfect Frank Turner set would look like. Valid thing to consider with the German Tour just a few days away, right ;-)? Even closer now that I’m typing this. Doors at my first venue open in less than 72 hours *squee*!

There is no way I could compile a setlist from scratch, so to have some kind of base to work with, I randomly pulled two setlists of the most recent UK and most recent US leg of the ongoing PS4NP Tour 2015/16 from setlist.fm . And then I looked at those two lists (from gigs about three weeks apart) and was baffled, because on first glance it looked like Frank had decided to just play the main set in reverse order in the US. On the same tour!

Spoiler Alert: He didn’t do that, of course. I noticed that on 2nd glance ;-) I’ll get to my 3nd glance at the end of this post.

But back to business: my first step after the 2nd glance was to choose which of these two lists to use as my base to work on. I’d gone for the UK one, starting with “Eulogy” and ending the main set with “Get Better” and not the other way round. Because “Get Better” is one of my favourites and anticipation is part of the fun, isn’t it?

Next I pondered for a few hours – I was sitting at home during the Holidays after all *g* – which songs I could easily do without and more importantly which songs I definitely would need to add. And while it was easy to make space by losing songs like “Peggy Sang the Blues” or “Glory Hallelujah”, choosing which songs to add was so much harder.  Because there are so many songs I would love to see him play live more often. Or see him play live for a first time for me anyway.  So, this was the first roadblock.

Then I also had to find the right spot during the set for those newly added songs, because even with my limited musical knowledge, I know not every song works after any other song. At least not with Frank’s songs. That combined with the seemingly impossible task to choose just a few of my (less played) favourites but at the same time keep a basic structure of classics and new songs provided the final roadblock and I gave up. After half a day of playing around with this idea. LOL.

By then I hadn’t even start considering necessary switch of instruments for Frank (acoustic to electric guitar) or Matt (keyboard to mandoline) or something like different keys for the various songs. Latter because I don’t really know anything about making music.

I’m really glad I don’t have to compile Frank Turner setlists for a living, because I obviously suck at it.

Compiling a close-to-perfect setlist is a damn hard job to pull off! After just a few hours of wracking my brain about it my respect and admiration for the man who does it for every gig on every tour grew even more. Kudos, Frank!

But while I was typing up this post tonight and compared the two setlists once again (3rd glance) the nerd-y part of my brain kicked into full gear and felt the urge to have a closer look at those lists after all. To deconstruct them and find patterns. Because even though I don’t know much about music, I figured there had to be some pattern. If I had taken the 3nd glance right away, I might have been a bit more successful in compiling – not the perfect, but may at least – any kind of setlist of my choosing. Oh, well, next time. Maybe…

So here are the patterns my nerdist brain found tonight.

[I have to take another photo in real daylight tomorrow and hope it comes out better than this.] 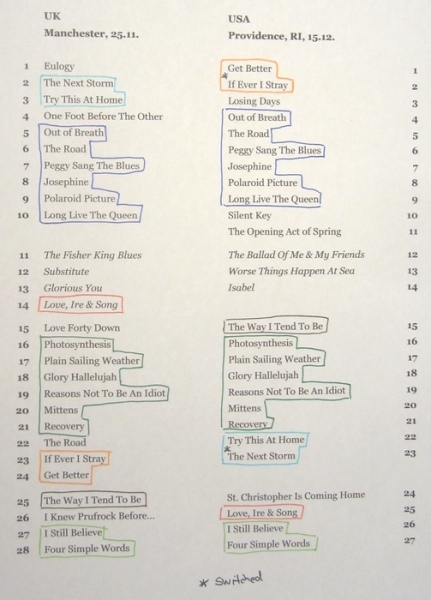 To be honest, I’ve doodled and drew a lot more on a lot more of those printouts before it looked like that. At one point I even thought about colorcoding each song according to album, but then I thought, that might take it a bit too far into OCD territory ;-)

I probably could have done this with Excel or Word as well or maybe even quicker, but weirdly enough it felt much more productive to draw and doodle with pens on paper. It’s a kind of meditative, relaxing but also kind fun activity for a Friday night at home.

And it’s been fascinating for me to notice these patterns for the first time after having seen more than 10 Frank Turner gigs. I just never thought about looking for them.  Maybe a more musical person would have noticed these earlier, but I don’t really consider myself a musical person as such. I sing mostly off-key, I can’t read notes (anymore), I don’t play an instrument, I don’t really have any grasp on “making or analyzing music”. I just very much enjoy listening to it or to dance along.

Part 2 about a few of the songs I would definitely like to put onto “my” perfect setlist will hopefully follow on Sunday, but for now my brain is fried.

This entry was posted in Entertainment and tagged Frank Turner, Music, Setlist. Bookmark the permalink.