And on the worst days,
When it feels like life weighs ten thousand tonnes,

and to be honest I only picked the one at the top in a desperate attempt to put myself in a more positive mindset. It seemed to have worked. For a bit. But otherwise this day has been more or less a lost day. Lost in anxiety. Lost in so much annoying noise from the demolition site next door. Annoyances from the office. Worries. So much worries and I’m not even sure I had a reason to worry. I really need to get more of a grip.

I guess it all started in a wrong way when I woke up only moderately rested. No surprise, when I checked the “stressometer” ;-) on my Garmin App. On good days I’m usually a below 25, on busy days it’s mid 30.) 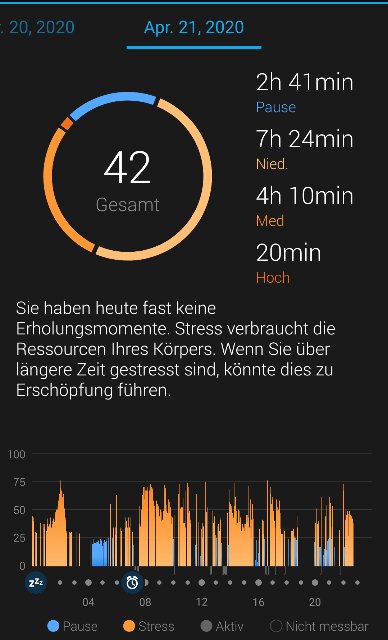 I mean… what on earth could stress me out like this in sleep? I don’t remember a nightmare or anything. But the underlying feeling stressed about God knows what continued through the day. I spent the afternoon on Bro2s patio, using his WiFi to get some office work done at least, listening to “England Keep My Bones” – in preparation for Frank’s next live stream on Thursday , enjoying the sun. Trying to chill. When I ignored a missed call from my supervisor, because the call was about 5 hours late (hence the annoyances) and I just couldn’t be bothered to react anymore today.

While I listened to England Keep My Bones I was once again impressed by some of the lyrics. I called them “profound life advice” on Twitter this afternoon and while I’m now not so sure that’s correct for all of the lyrics, here are a few of my favourites. Make of them what you may :-)

Round here the sky is a little closer,
A little closer to the ground.
It’s hard for someone to get lost here,
Harder still to get found.

And on the worst days,
When it feels like life weighs ten thousand tonnes,

We’ve all got secrets that we hold inside,
The worst little things that you never confide,
And the worst one of all that you just can’t hide
Is that you’re never quite as strong as you sound.

This entry was posted in Daily and tagged Daily, Life, Worrying. Bookmark the permalink.